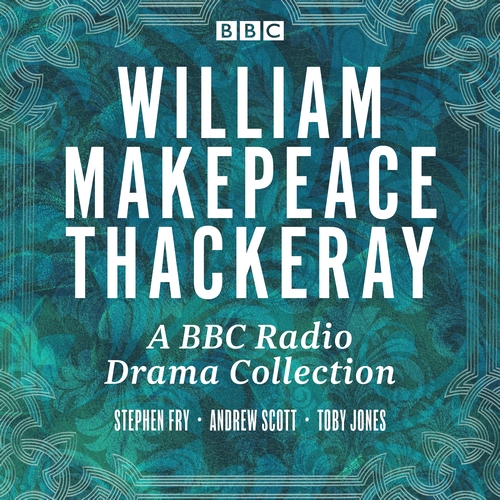 Best known today for his comic masterpiece, Vanity Fair, W. M. Thackeray was regarded in his time as the only rival to his contemporary, Charles Dickens. This collection includes a selection of his finest satirical fiction, as well as two fascinating programmes exploring his life and writings.

Vanity Fair - Set against the backdrop of the Napoleonic Wars, Thackeray's deliciously ironic tale of passion and ambition follows the fortunes of penniless, social-climbing Becky Sharp and her wealthy, sweet-natured best friend, Amelia Sedley. Starring Stephen Fry as the Narrator, with Emma Fielding as Becky and Katy Cavanagh as Amelia and Toby Jones as Jos.

Barry Lyndon - Forced to leave his native Ireland after an unfortunate duel, young Redmond Barry embarks on a series of adventures that take him from the battlefields of the Seven Years War to the highest courts of Europe and the drawing rooms of English society. Gerard McSorley and Andrew Scott star in Thackeray's picaresque classic alongside Shelia Hancock and Kenneth Cranham

The Yellowplush Papers- Adam Buxton stars in these five comic tales about the rise and fall of canny Regency footman Charles Yellowplush.

Pendennis - Thackeray's semi-autobiographical coming-of-age tale charts the youthful exploits of handsome, impoverished Arthur Pendennis as he leaves his home in the country to make his way in London society. Dominic Guard stars as Arthur, with Hugh Dickson as The Writer.

Andrew Davies/William Thackeray - James Naughtie and a group of readers chat to Andrew Davies about Thackeray's classic novel, Vanity Fair, which he adapted for BBC TV in 1998.

NB: Due to the age and nature of some of the recordings, the sound quality may vary

Cast and credits
Written by W. M. Thackeray
With thanks to Keith Wickham