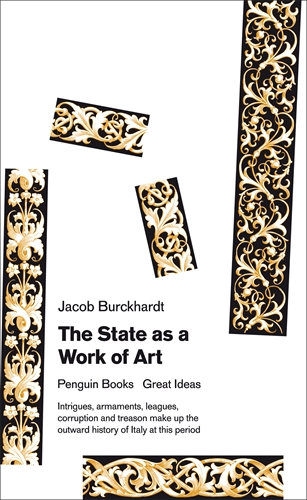 The State as a Work of Art

Pioneering art historian Jacob Burckhardt saw the Italian Renaissance as no less than the beginning of the modern world. In this hugely influential work he argues that the Renaissance's creativity, competitiveness, dynasties, great city-states and even its vicious rulers sowed the seeds of a new era.

GREAT IDEAS. Throughout history, some books have changed the world. They have transformed the way we see ourselves - and each other. They have inspired debate, dissent, war and revolution. They have enlightened, outraged, provoked and comforted. They have enriched lives - and destroyed them. Now Penguin brings you the works of the great thinkers, pioneers, radicals and visionaries whose ideas shook civilization and helped make us who we are.