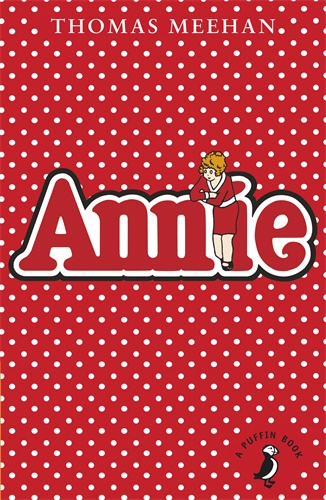 The story of Annie - everyone's favourite orphan - with an introduction by writer, actor and comedian Miranda Hart.

It's 1933 and for as long as she can remember, 11 year old Annie has believed that her mother and father would come back to her New York City orphanage to get her. But mean Miss Hannigan the headmistress is making Annie's life a misery. So she runs away to find her parents - and along the way she rescues a friendly dog, meets millionaire Oliver Warbucks, and has a many scary and exciting adventures. Will kind-hearted Annie find a way to escape her hard-knock life?

The author THOMAS MEEHAN is the playwright of the original Broadway play and he has expanded the story of the plucky little orphan in this classic American tale.

Thomas Meehan was born in New York in 1929. He worked as a journalist for the New Yorker magazine and wrote comedy sketches for the satirical TV show, 'That Was the Week That Was'. He received a Tony Award for Annie in 1977, for The Producers in 2001 and in 2003 for the musical Hairspray. He currently lives in New York city and in Nantucket, Massachusetts.

Also available in A Puffin Book:
GOODNIGHT MISTER TOM and BACK HOME by Michelle Magorian
CHARLOTTE'S WEB, STUART LITTLE and THE TRUMPET OF THE SWAN by E. B. White
THE BORROWERS by Mary Norton
STIG OF THE DUMP by Clive King
ROLL OF THUNDER, HEAR MY CRY by Mildred D. Taylor
A DOG SO SMALL by Philippa Pearce
GOBBOLINO by Ursula Moray Williams
MRS FRISBY AND THE RATS OF NIMH by Richard C O'Brien
A WRINKLE IN TIME by Madeleine L'Engle
THE CAY by Theodore Taylor
TARKA THE OTTER by Henry Williamson
WATERSHIP DOWN by Richard Adams
SMITH by Leon Garfield
THE NEVERENDING STORY by Michael Ende
THE FAMILY FROM ONE END STREET by Eve Garnett