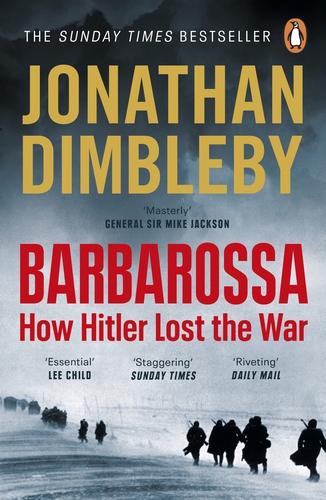 How Hitler Lost the War

'The best single-volume account of the Barbarossa campaign to date' Andrew Roberts, author of Churchill: Walking with Destiny

The largest military operation in history. The turning point of the Second World War. The most important year of the twentieth century.

Operation Barbarossa, Hitler's invasion of Russia in June 1941, aimed at nothing less than a war of extermination to annihilate Soviet communism, liquidate the Jews and create Lebensraum for the German master race. But it led to the destruction of the Third Reich, and was cataclysmic for Germany with millions of men killed, wounded or registered as missing in action. It was this colossal mistake -- rather than any action in Western Europe -- that lost Hitler the Second World War.

Drawing on hitherto unseen archival material, including previously untranslated Russian sources, Jonathan Dimbleby puts Barbarossa in its proper place in history for the first time. From its origins in the ashes of the First World War to its impact on post-war Europe, and covering the military, political and diplomatic story from all sides, he paints a full and vivid picture of this monumental campaign whose full nature and impact has remained unexplored.

'Superb. . . stays with you long after you have finished' Henry Hemming, bestselling author of Our Man in New York

'A chilling account of war at its worst' Bear Grylls