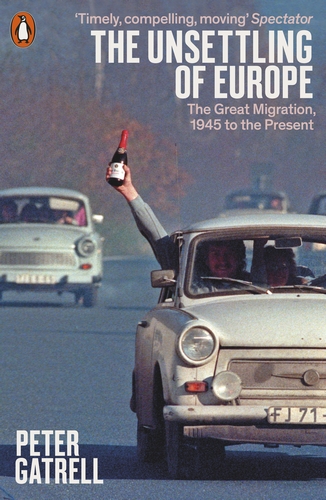 The Unsettling of Europe

The Great Migration, 1945 to the Present

SHORTLISTED FOR THE LIONEL GELBER PRIZE 2020

A TIMES LITERARY SUPPLEMENT BOOK OF THE YEAR 2019

Migrants have stood at the heart of modern Europe's experience, whether trying to escape danger, to find a better life or as a result of deliberate policy, whether moving from the countryside to the city, or between countries, or from outside the continent altogether.

Peter Gatrell's powerful new book is the first to bring these stories together into one place. He creates a compelling narrative bracketed by two nightmarish periods: the great convulsions following the fall of the Third Reich and the mass attempts in the 2010s by migrants to cross the Mediterranean into Europe.

The Unsettling of Europe is a new history of the continent, charting the ever-changing arguments about the desirability or otherwise of migrants and their central role in Europe's post-1945 prosperity. Gatrell is as fascinating on the giant movements of millions (such as the epic waves of German migration) to that of much smaller groups, such as the Karelians, Armenians, Moluccans or Ugandan Asians. Above all he has written a book that makes the reader deeply aware of the many extraordinary journeys taken by countless individuals in pursuit of work, safety and dignity, all the time.

This is a landmark book on a subject that, decade by decade, will always haunt Europe.

'Peter Gatrell has produced a tour de force ... This important and timely work on one of the most challenging issues in modern Europe deserves to be widely read' Ian Kershaw