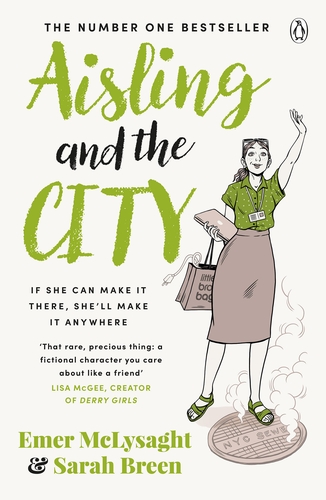 Aisling And The City

The hilarious and addictive romantic comedy from the No. 1 bestseller

The brand new, utterly hilarious and totally addictive romantic comedy in the No. 1 bestselling AISLING series

'That rare, precious thing: a fictional character you care about like a friend. It's a joy to spend time with Aisling again' LISA McGEE, creator of DERRY GIRLS
________

Anything is possible in the bright lights of New York . . .

Aisling is 31 and life is good. Yes, her relationship with boyfriend John may be over but her café, BallyGoBrunch, is booming and it isn't long before an exciting offer lands: a catering gig in The Big Apple.

Armed with her best wrap dress and heels, Aisling boards a business-class flight to New York to start a new adventure.

But life in the city isn't as easy and glamorous as she first thought. Alone and homesick, Aisling fears she has made a terrible mistake

'The characters are so vivid' 5***** Reader Review

Praise for the Aisling Series:

'The Irish answer to Bridget Jones . . . it's stuffed with laughs' Daily Mail