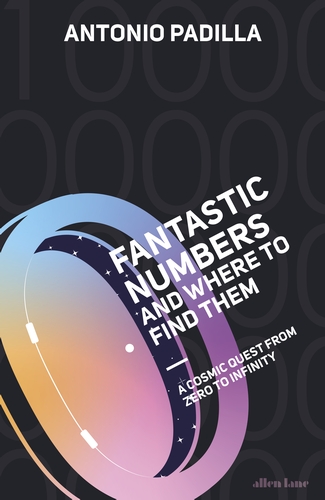 Fantastic Numbers and Where to Find Them

A Cosmic Quest from Zero to Infinity

What are the mysterious numbers that unlock the secrets of the universe?

In Fantastic Numbers and Where to Find Them, leading theoretical physicist and YouTube star Tony Padilla takes us on an irreverent cosmic tour of the most extraordinary numbers in physics, using them to build a picture of how the universe works. These include Graham's number, which is so large that if you thought about it in the wrong way, your head would collapse into a singularity; TREE(3) and the mathematical games that could carry on until the universe reset itself; and 10^{-120}, which measures the desperately unlikely balance of energy the universe, and you, need to exist.

Leading us down the rabbit hole to the inner workings of reality, Padilla demonstrates how these unusual numbers-big, small and worryingly infinite-are the key to unlocking such mind-bending phenomena as black holes, the holographic truth and the problem of the cosmological constant, where our two best theories of the universe come together with embarrassing consequences. Combining cutting-edge science with an entertaining cosmic quest, Fantastic Numbers and Where to Find Them is an electrifying, head-twisting guide to the most fundamental truths of the universe.