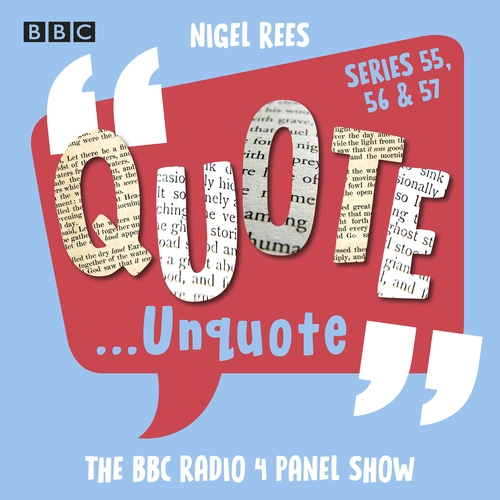 The last ever episodes of the acclaimed quotations quiz, devised and introduced by Nigel Rees - including the historic 500th show

Ever since 1976, Quote... Unquote chairman Nigel Rees has quizzed a host of well-known personalities on the origins of popular sayings, both familiar and obscure, and encouraged them to contribute their own quotes, anecdotes and catchphrases. But - to paraphrase Chaucer - all good things must come to an end, and with Series 57, the long-running panel game takes its final bow.

Their quota of quotations to identify ranges from memorable lines from the worlds of literature, film and music, to comic catchphrases, famous last words and evergreen epitaphs. There's also an opportunity for the panellists to share the brilliant bon mots they wish they'd said, and dispense their favourite family sayings and the nuggets of wisdom that they've picked up over the years.

Also included in this release is 'Quote... Unquote: A Celebration', a special episode marking the end of an era for the long-running literary panel game.

So join Nigel and guests for a feast of aphorisms, epigrams, wisecracks and witty rejoinders, and prepare to be inspired, amazed and thoroughly entertained.