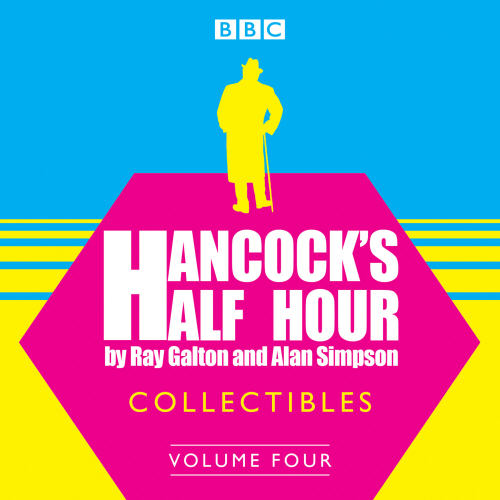 In this fourth treasury of rare archive material, our irrepressible hero forms an association to save Fred’s Pie Stall, in a newly restored 1959 radio episode of Hancock’s Half Hour. From the BBC TV series comes The Italian Maid (1959) in which Tony and Sid are bowled over by the lovely Silvano.

Two 1952 editions of Calling All Forces line up alongside a 1953 edition of Star Bill, and an extract from The National Radio Awards 1951 features Hancock in a rare Educating Archie sketch.

In Hancock’s Helpers, from 2004, Russell Davies looks at Tony Hancock’s on-air and off-air relationship with his co-stars, whilst a 2009 edition of Great Lives examines the legacy of the lad ‘imself. Hancock and Son, from 1998, traces the writing partnership of Galton & Simpson.

Also included in this treasury are interviews with Paul Merton, Roger Wilmut and Freddie Hancock, who all talk about the life and career of Tony Hancock. A bonus PDF booklet looks at each item in the context
of Hancock’s broadcasting career, with insights into how many of these lost or rare items were discovered.

Marking the legacy of one of our greatest comedy entertainers, this collection is a must for fans of Tony Hancock and Hancock’s Half Hour.