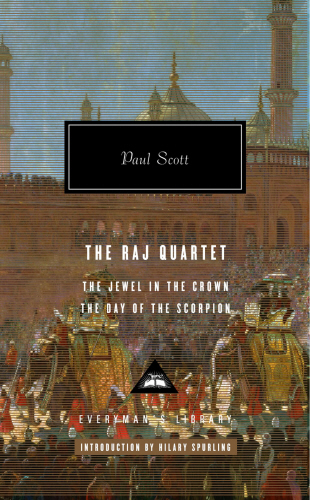 Paul Scott's epic study of British India in its final years has no equal. Tolstoyan in scope and Proustian in detail but completely individual in effect, it records the encounter between East and West through the experiences of a dozen people caught up in the upheavals of the Second World War and the growing campaign for Indian independence. Book one, The Jewel in the Crown, describes the doomed love between an English girl and an Indian boy, Daphne Manners and Hari Kumar. This affair touches the lives of other characters in three subsequent books, most of them unknown to Hari and Daphne but involved in the larger social and political conflicts which destroy the lovers.
On occasions unsparing in its study of personal dramas and racial differences, the Raj Quartet is at all times profoundly humane, not least in the author's capacity to identify with a huge range of characters. It is also illuminated by delicate social comedy and wonderful evocations of the Indian scene, all narrated in luminous prose.