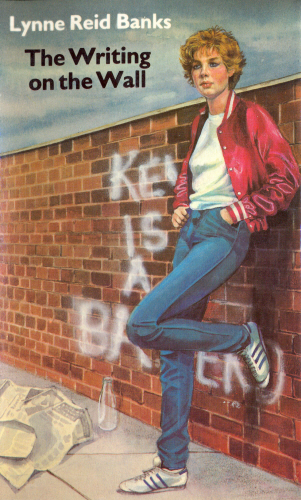 Writing On The Wall

Tracy wasn't surprised that her dad disapproved of Kev, with his hair in spikes, his Dayglo socks and all the rest of his punk gear. But she liked the way he looked and enjoyed going round with him. Besides, she was determined to have a good time before she had to get some boring job and settle down, like her sister Mary.
That was why the trip to Holland seemed such a great idea. Of course it was Kev who suggested it, and Tracy knew that her parents would never let her go off with Kev, just the two of them. On the other hand, if there was a whole bunch of them going, including her friend Karen and some of the others from school, Dad might - just might - say yes.
As things turned out, persuading Dad to say yes was only the beginning of her troubles. In fact so much went wrong that it was hard, afterwards, to remember the good bits, and it wasn't until the whole awful business was over that Tracy realised she should have seen what was going on all along.