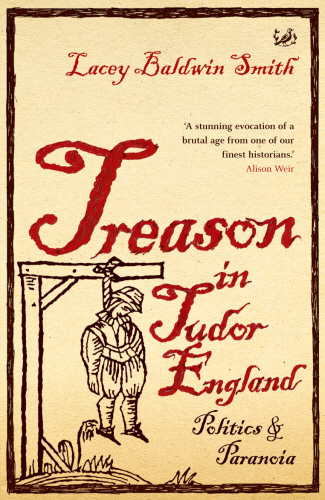 Tudor England abounded with traitors great and small, whose ill-timed, self-defeating and irrational antics guaranteed their failure. Yet from the inept and calamitous intrigues of 'Sweet-Lips' Gregory Botolf in 1540 and Lord Admiral Thomas Seymour during the reign of Edward VI, to the bungling efforts at a palace coup by Robert Devereux, second Earl of Essex, during the final years of Elizabeth's reign, treason didn't prosper. Modern historians tend to dismiss the wave of political disasters as the works of men of unsound mind. Here, Lacey Baldwin Smith re-evaluates this mania for conspiracy in the light of psychological and social impulses peculiar to the age.

Tudor England accepted unquestioningly the conspiracy theory of history; it assumed the existence of evil; and it instinctively believed that a greater and usually malicious reality lay behind outward appearance. Sensible men were for ever on guard against their Iago, dedicated to evil for its own sake, who lurked under the guise of a trusted friend or servant. Father's advised their sons, 'Love no man: trust no man'; contemporary literature and drama reflected and reinforced this belief, as did the essentials of Tudor education which taught students how to dissemble convincingly upon a public stage.

By looking at the behaviour of the flamboyant Robert Devereux (who bore all the hallmarks of paranoia) as a case study in political hysteria, Lacey Baldwin Smith examines the ways in which insecurity in the midst of political and religious revolution was obsessive and self-perpetuating, and produced throughout the kingdom a state of hysteria that was unique to the sixteenth century.