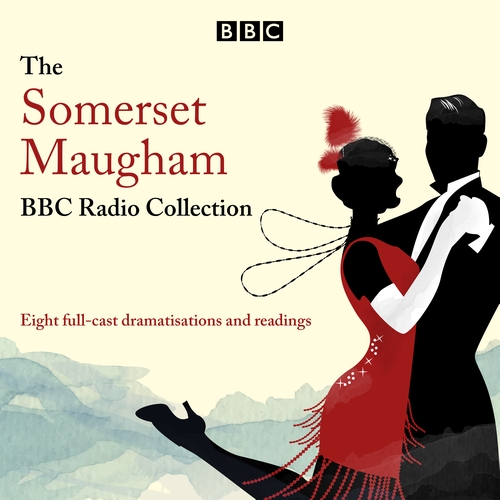 William Somerset Maugham was one of the most successful English writers of the 20th Century, and remains the most adapted for film and TV. This collection includes eight of his novels, plays and short stories, as heard on BBC radio, as well as an illuminating interview with the author himself.

The Moon and Sixpence - Respectable stockbroker Charles Strickland abandons his wife and children to live as a painter in Paris and Tahiti. Starring Ronald Pickup and Patrick Allen.

The Painted Veil - First published in 1925 to a storm of protest, this is a haunting, poignant tale of one woman's spiritual awakening. Starring Sarah Smart and Nicholas Farrell.

The Sacred Flame- Invalided following an air crash, Maurice is determined to remain cheerful. But his condition affects all those who are close to him. Starring Julian Glover, Wendy Hiller, Hannah Gordon and Janet Maw.

Ashenden, Gentleman Spy - Ashenden, a writer by profession, returns from the First World War and is offered a position in the Secret Service. Five short stories based on Maugham's own wartime experiences, read byAlex Jennings.

For Services Rendered- In this incisive state-of-the nation play, it is 1932, and the progressive Ardsley family seem to be managing their lives very well. But in reality, each of them is fighting for survival. Starring David Calder, Sian Thomas and Louise Brealey.

The Narrow Corner - Sailing home from the East Indies, a doctor and his two companions are forced to seek shelter on the island of Kanda - where they encounter the beautiful, sultry Louise... Starring Garard Green, Owen Scott, Douglas Blackwell and Cara Kelly.

Christmas Holiday - 1938, and Charley is looking forward to spending Christmas in Paris with his old school friend, Simon. But they are both ignorant of the storm clouds lowering over Europe... Starring Peter Rumney and Anthony Daniels.

The Razor's Edge - After the First World War, Larry Darrell returns to Chicago but finds it difficult to fit back into society. To the dismay of his fiancée, Isabel, he heads for Paris and embarks on a spiritual quest. StarringNicholas Le Prevost, John Light and Megan Dodds.