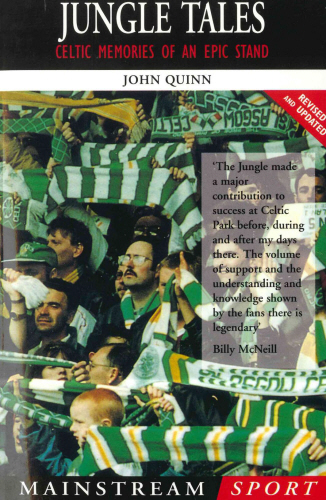 Years of tradition crashed around the ears of Celtic supporters when the Jungle was demolished and replaced by seating to conform with the Taylor Report. It might never have been the most attractive setting in which to watch football but to the fans who occupied the gentle slopes under the covered North Enclosure it was as familiar as their own living-room. To them it was the nerve-centre of all that was good about their team and about Scottish football in general. There they had gathered to witness the great dramas unfold, the star players weave their artistry, and there they experienced the nerve-jangling, magical nights as Celtic joined the ranks of great European sides in the 1960s.

John Quinn spent months interviewing the people who shaped the history of the Jungle. Star players past and present describe their favourite memories and the fans themselves recall the scenes indelibly etched in their minds. Jungle Tales is an exercise in pure nostalgia. It is in many ways a book by the fans for the fans as they reminisce over past glories and long for the days when they will return.