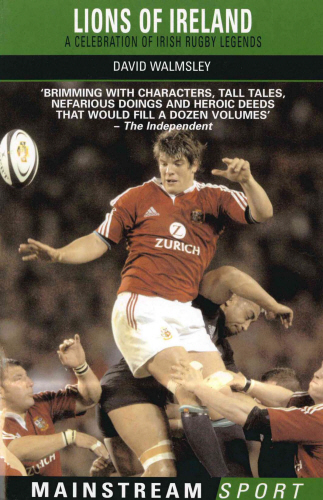 Look for a Lions legend and the chances are you will find an Irishman. Throughout the touring team's history, the heroes of Irish rugby have been at the heart of the Lions' finest hours - on and off the pitch.

Look at the Lions record books and you will find Irishmen at the top of almost every list, from Willie John McBride and Tony O'Reilly to Ronnie Dawson. No nation has provided more leaders of the Lions.

In Lions of Ireland, these greats tell their stories of life on some of the longest, hardest roads in sport. Those featured include world-class players and characters who have contributed to Lions folklore, such as Karl Mullen, Jack Kyle, Fergus Slattery, Tom Kiernan, Mike Gibson and Syd Millar - and the account is brought up to date with contributions from the likes of Keith Wood.

This book includes a complete reference section featuring every Irish player to have represented the Lions in Tests since the first united tour of 1910. It recalls the powerful personalities and relives the most dramatic deeds in the Lions' long history - from the 1971 groundbreaking triumph against the All Blacks and success against the odds in South Africa in 1997 to the 2005 tour of New Zealand.