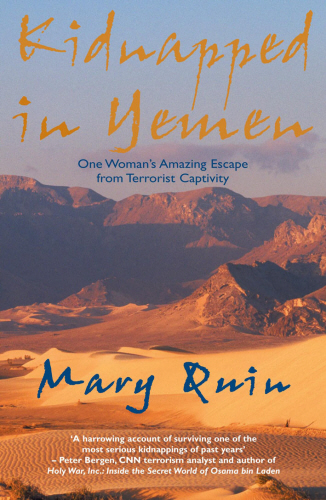 When Mary Quin ripped an AK-47 from the hands of a wounded kidnapper and made her escape in the Yemeni desert, she knew her life could never be the same. An exotic vacation had turned into a nightmare as she and 15 fellow tourists were used as human shields in a terrifying gun battle between the Aden-Abyan Islamic Army and Yemeni troops that left four hostages and three kidnappers dead.

Lucky to be among those who survived, Quin returned to the United States but found herself preoccupied with trying to understand why the kidnapping occurred.

Her absorbing journey through murky militant Islam and shadowy terrorist groups led her back to Yemen to try to piece together the puzzle - talking to the Yemeni Prime Minister, British embassy staff, the FBI and prisoners accused of terrorism. Her enquiries also took her to London to meet Abu Hamza al-Masri, the notorious disfigured cleric with ties to the Aden-Abyan Islamic Army.

Kidnapped in Yemen is the unforgettable first-hand account of this remarkable woman's unusual story of curiosity, survival and healing.