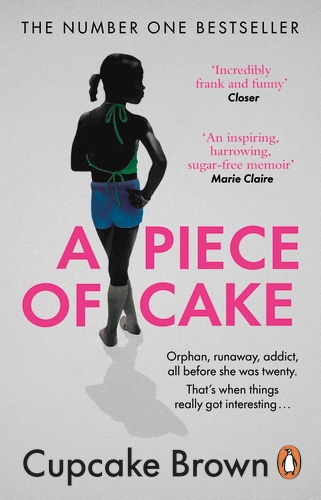 A Piece Of Cake

'Phenomenal woman' The Oprah Magazine
'Dazzles you with the amazing change that is possible in one lifetime.' Washington Post

This is the heart-wrenching true story of a girl named Cupcake Brown.

Orphan, runaway, addict, all before she was twenty. That's when things got really interesting...

Cupcake was just eleven years old when, orphaned, she entered the child welfare system. Moved from one disastrous placement to the next, like so many, she was neglected and sexually abused.

She fed her appetite for drink and drugs by selling the only thing she had. Her body. Before long she had stumbled head first into a world of gangs and extreme violence. After one crack binge she woke up behind a dumpster. Half-dressed and more than half-dead, she knew she had a choice. Change her life or die.

Brutally frank and startlingly funny, A Piece of Cake is the remarkable true story of a resilient spirit who triumphed over the very worst that life could throw at her.