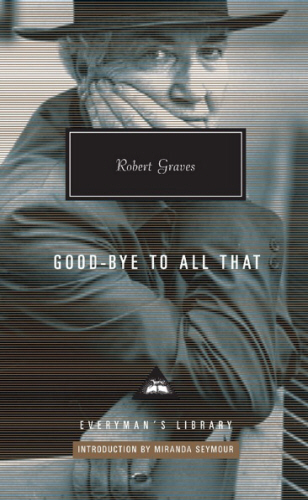 Goodbye to all that

Robert Graves, aged nineteen, left school within a week of the outbreak of World War I, and immediately volunteered with the Royal Welch Fusiliers. His experiences as a junior officer form the heart of this compelling autobiography. Beginning with an ironic overview of his Edwardian childhood, he proceeds to a tongue-in-cheek account of a young poet's life at public school (not helpful to be half-German, but handy to take up boxing), progressing to caricatures of military stereotypes he encounters in training, and the devastating farce of the War itself, the blundering and mismanagement, and the appalling human consequences. Graves's handling of the horrors of war is always deadpan, honest and unadorned. It is wholly in line with his sense of the absurd that his commanding officer should write to inform his parents that he had died of wounds during the battle of the Somme. He soon found that patriotism was meaningless to the men in the trenches; loyalty to comrades alive and dead drove him back to active service though still suffering from shell-shock.
Goodbye to All That takes Graves through his convalescence in England, his efforts to protect the poet Siegfried Sassoon, a friend and fellow officer, from the consequences of his public denunciation of the war; marriage to artist and feminist Nancy Nicholson, postwar undergraduate years at Oxford and a decade as a struggling writer with four young children, beset with money problems and neurasthenia. It is written in a spirit of defiance as he prepared to put 'all that' behind him and begin a new life in Majorca with the American poet Laura Riding.