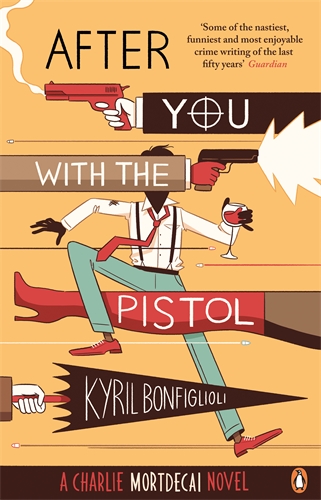 After You with the Pistol

After you with the Pistol - the second Charlie Mortdecai novel by Kyril Bonfiglioli, soon to be a major film starring Johnny Depp

'Some of the nastiest, funniest and most enjoyable crime writing of the last fifty years' Guardian

'Mr Mortdecai, why do you suppose I and my superiors have preserved you from death at very very great trouble and expense?'

Charlie Mortdecai - degenerate aristocrat and victim of his own larceny and licentiousness - has no idea. Until it is made clear to him that he must marry the beautiful, sex-crazed and very, very rich Johanna Krampf. The fly in the ointment is that Johanna thinks nothing of involving poor Charlie in her life-threatening schemes such as monarch-assassination, heroin smuggling and - worst of all - survival training at a college for feminist spies. Perhaps, it's all in a good cause - if only Charlie can live long enough to find out.

'A rare mixture of wit and imaginative unpleasantness' Julian Barnes

'Splendidly enjoyable. The jokes are excellent, but the most horrible things keep happening' Sunday Telegraph

'At least of Hammett-Chandler weight, and in many ways surpasses them' The Times Literary Supplement

Kyril Bonfiglioli was born on the south coast of England in 1928 of an English mother and Italo-Slovene father. After studying at Oxford and five years in the army, he took up a career as an art dealer, like his eccentric creation Charlie Mortdecai. He lived in Oxford, Lancashire, Ireland and Jersey, where he died in 1985. He wrote four Charlie Mortdecai novels, and a fifth historical Mortdecai novel (about a distinguished ancestor).