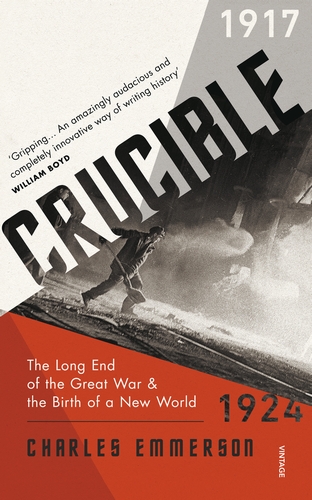 An enthralling narrative history with an international cast of characters that captures this definitive period after the close of the Great War.

Lenin and Hitler, Einstein and Hemingway, Josephine Baker and Rosa Luxemburg, Marcus Garvey and Mustafa Kemal: key players and participants in a world on the cusp of modernity, at a moment when anything seemed possible.

As the First World War reaches its awful climax, a shockwave of creative destruction is released. Europe is torn apart by revolution. America is in flames. A deadly pandemic stalks the globe. The curtain rises on a dangerous and exciting new era not unlike our own: of populists and prophets, freedom fighters and fascists, radical new ideas and clashing ideologies contesting an uncertain future.

Crucible is the collective diary of this era, filled with vaulting dreams, dark fears, grubby ambitions and the absurdities of chance. Encompassing both tragedy and humour, it brings immediacy and intimacy to a moment of deep historical transformation - with consequences that echo down to today.

'Dazzling . . . A compelling patchwork depiction of an era' TLS