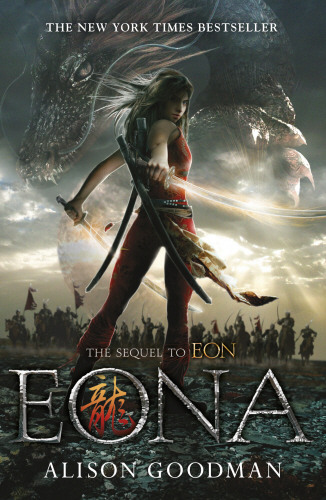 Eona: Return of the Dragoneye

Eon is now Eona, the Mirror Dragoneye - one of just two surviving Dragoneyes, the human links to the twelve energy dragons and their power. On the run after the massacre in the Imperial Palace, she must find a way to restore Kygo, the dead Pearl Emperor's true heir, to the throne.

But High Lord Sethon has claimed the throne for himself, and he is determined to create the String of Pearls, a terrible weapon that combines the power of all twelve dragons. Eona's only hope is to find the stolen Black Folio before he does. But first she must learn to resist the power of ten mourning dragons, and only Lord Ido, the man responsible for their grief, can help her.

As the race for the Black Folio intensifies, she finds herself forced to choose between Ido and Kygo. Both men want Eona, but do they truly love her, or just the power she can give them?

Eona must face assassins, savage battles, jealousy and betrayal to discover the heartbreaking truth about herself, the Mirror Dragon and the String of Pearls.