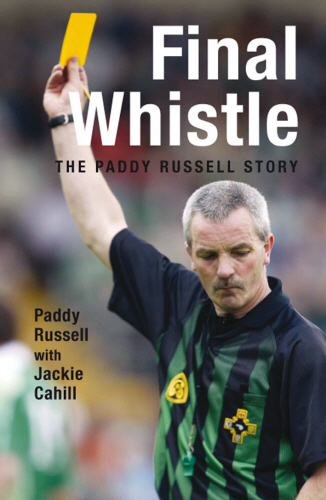 Tipperary native Paddy Russell has been one of the leading referees in the GAA for the past 30 years. His story is a remarkable one, following his rise from humble beginnings to the pinnacle of two All-Ireland finals.

Inspired by the late, great John Moloney, Russell took his first steps in refereeing in 1976. He quickly emerged as a leading light and rapidly worked his way to the top of his profession.

Russell has enjoyed a successful career but it is also one laced with drama, most notably that arising from the 1995 All-Ireland senior football final between Tyrone and Dublin. Russell later took charge of the tempestuous National Football League clash between Dublin and Tyrone in 2006, which became known as 'The Battle of Omagh', and the stormy showdown between Leinster rivals Dublin and Meath in April 2008. Just two months later, Russell was in charge of the Munster senior football championship tie between All-Ireland champions Kerry and Clare when Kerry captain Paul Galvin slapped the referee's notebook from his hands, earning a three-month suspension.

In Final Whistle, Russell reflects on his eventful journey, including these controversial matches, and describes vividly the stresses and strains of refereeing modern-day Gaelic games.