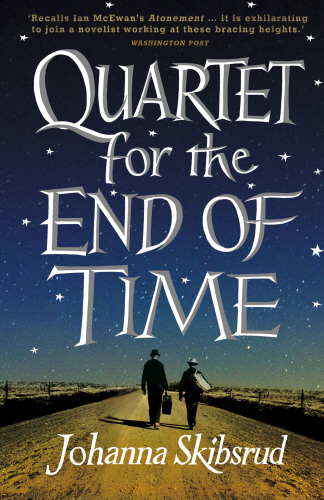 Quartet for the End of Time

A mesmerising tale of love, justice and the connections that transcend the passage of time, from the Giller prize-winning author Johanna Skibsrud.

The year is 1932, and America is roiling with unrest. Angry World War One veterans, embittered by the ruinous poverty inflicted by the Great Depression, join forces and, calling themselves the Bonus Army, march on Washington to demand payment of the wartime bonus promised them for their service during the war.

Arthur and Douglas Sinclair, an impoverished veteran and his son, make the arduous journey from Kansas to join the march. Alden and Sutton Kelly, the rebellious children of a powerful Washington judge, become involved with the veterans’ struggle, causing an irreparable rift in the Kelly family. When the Bonus march explodes in a violent clash between government and veteran forces, Arthur is falsely accused of conspiracy and disappears. The lives of Douglas, Alden, and Sutton are forever changed – linked inextricably by the absence of Arthur Sinclair.

As these three lives unfold, we are taken to unexpected places – from the underground world of a Soviet spy to Hemingway’s Florida and the hard labour camps of Roosevelt’s New Deal Projects in the Keys; from occultist circles in London to occupied Paris and the eventual fall of Berlin; and finally, to the German prison camp where French composer Olivier Messiaen originally wrote and performed his famous Quartet for the End of Time. Taking us on an unforgettable journey through individual experience and memory against the backdrop of seismic historical events, Quartet for the End of Time is both a profound meditation on human nature and an astonishing literary accomplishment from one of the most original voices to have emerged in recent years.