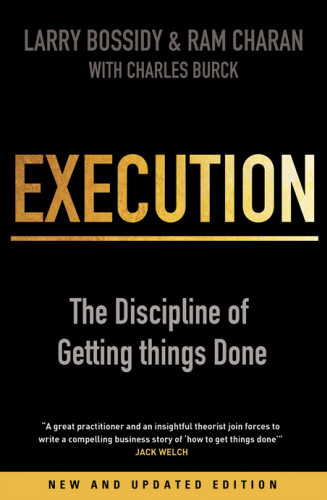 The Discipline of Getting Things Done
Paperback

When Execution was first published in 2002, it changed the way we did our jobs. By analysing the discipline of getting things done, it helped thousands of business people to make the final leap to success. Now, Larry Bossidy and Ram Charan reframe their empowering message for a world in which the old rules have been shattered and radical change is becoming routine. For the foreseeable future:

- Growth will be slower. But the company that executes well will have the confidence, speed and resources to move fast as new opportunities emerge.

- Competition will be fiercer, with companies searching for any possible advantage in every area.

- Governments will take on new roles in their national economies. And companies that execute well will be more attractive as partners and suppliers, and better prepared to adapt to new waves of regulation.

- Risk management will become a top priority for every leader, and every company will be looking for the edge in detecting new internal and external threats.

Forget formulating a 'vision', then leaving others to carry it out: Execution shows you how to link together people, strategy and operations - the three core elements of every organisation - and create a business based on dialogue, intellectual honesty and realism. With case histories from the real world - including such recent examples such as the diverging paths taken by Jamie Dimon at JPMorgan Chase and Charles Prince at Citigroup - Execution provides the realistic and hard-nosed approach to business success that could only come from authors as accomplished and insightful as Bossidy and Charan.