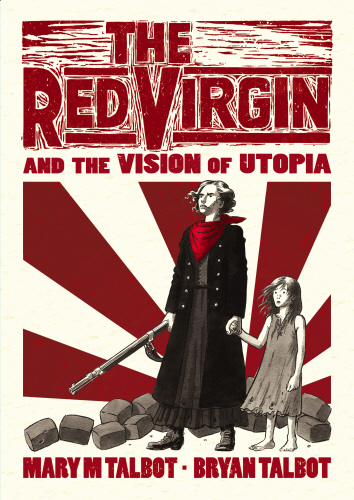 The Red Virgin and the Vision of Utopia

Set against the background of violence and state repression in a turbulent period of French history, The Red Virgin and the Vision of Utopia chronicles the incredible and outrageous life of Louise Michel, the revolutionary feminist dubbed ‘The Red Virgin of Montmartre’. A utopian dreamer, notorious anarchist, teacher, orator and poet, she was decades ahead of her time. Always a radical, she fought on the barricades defending the short-lived Paris Commune of 1871 against the reactionary regime that massacred thousands of French citizens after the Commune’s defeat. Deported to a penal colony on the other side of the Earth, she took up the cause of the indigenous population against French colonial oppression.

Celebrating the utopian urge in nineteenth-century literature and politics and the origins of science fiction, The Red Virgin and the Vision of Utopia is the third collaboration of best-selling academic and graphic novelist Mary M. Talbot with her husband, the graphic novel pioneer Bryan Talbot. Their first book together, Dotter of her Father’s Eyes, won the 2012 Costa Biography Award.