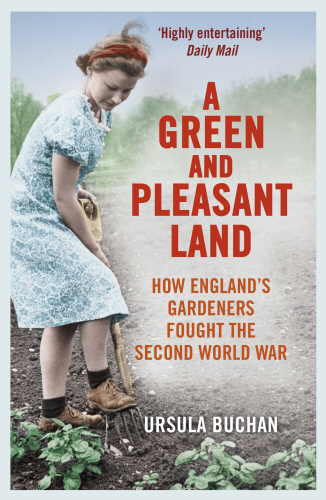 A Green and Pleasant Land

SHORTLISTED FOR INSPIRATIONAL BOOK OF THE YEAR AT THE 2014 GARDEN MEDIA GUILD AWARDS.

A Green and Pleasant Land tells the intriguing and inspiring story of how Britain's wartime government encouraged and cajoled its citizens to grow their own fruit and vegetables. As the Second World War began in earnest and a whole nation listened to wireless broadcasts, dug holes for Anderson shelters, counted their coupons and made do and mended, so too were they instructed to ‘Dig for Victory’.

Ordinary people, as well as gardening experts, rose to the challenge: gardens, scrubland, allotments and even public parks were soon helping to feed a nation deprived of fresh produce. As Ursula Buchan reveals, this practical contribution to the Home Front was tackled with thrifty ingenuity, grumbling humour and extraordinary fortitude. The simple act of turning over soil and tending new plants became important psychologically for a population under constant threat of bombing and even invasion. Gardening reminded people that their country and its more innocent and insular pursuits were worth fighting for. Gardening in wartime Britain was a part of the fight for freedom.