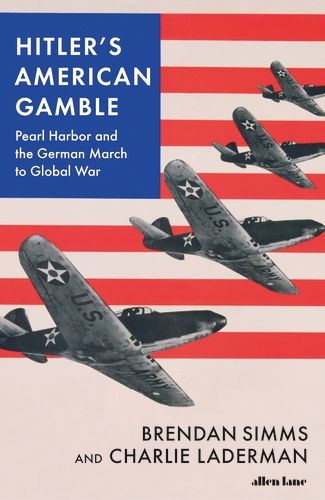 Pearl Harbor and the German March to Global War

SHORTLISTED FOR THE DUKE OF WELLINGTON MEDAL FOR MILITARY HISTORY 2022

This gripping book dramatizes the extraordinarily compressed and terrifying period between the surprise Japanese attack on Pearl Harbor and Hitler's declaration of war on the United States. These five days transformed much of the world and have shaped our own experience ever since.

Simms and Laderman's aim in the book is to show how this agonizing period had no inevitability about it and that innumerable outcomes were possible. Key leaders around the world were taking decisions with often poor and confused information, under overwhelming pressure and knowing that they could be facing personal and national disaster. And yet, there were also long-standing assumptions that shaped these decisions, both consciously and unconsciously.

Hitler's American Gamble is a superb work of history, both as an explanation for the course taken by the Second World War and as a study in statecraft and political choices.