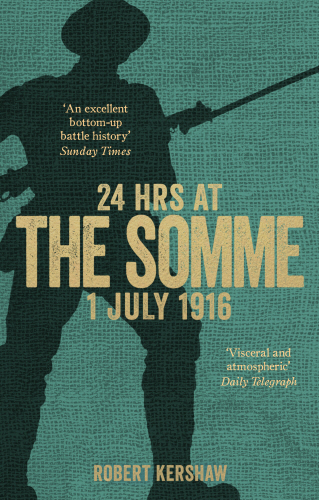 24 Hours at the Somme

The first day of the Somme has had more of a widespread emotional impact on the psyche of the British public than any other battle in history. Now, 100 years later, Robert Kershaw attempts to understand the carnage, using the voices of the British and German soldiers who lived through that awful day.
In the early hours of 1 July 1916, the British General staff placed its faith in patriotism and guts, believing that one ‘Big Push’ would bring on the end of the Great War. By sunset, there were 57,470 men – more than half the size of the present-day British Army – who lay dead, missing or wounded. On that day hope died.
Juxtaposing the British trench view against that from the German parapet, Kershaw draws on eyewitness accounts, memories and letters to expose the true horror of that day. Amongst the mud, gore and stench of death, there are also stories of humanity and resilience, of all-embracing comradeship and gritty patriotic British spirit. However it was this very emotion which ultimately caused thousands of young men to sacrifice themselves on the Somme.