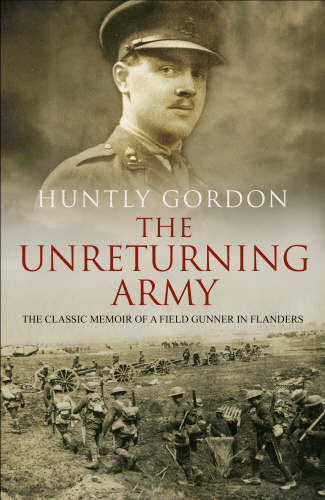 In the centenary year of the Great War, names such as Ypres, the Marne, the Somme, Passchendaele are heavy with meaning as settings for the near-destruction of a generation of men. It is this aura of tragedy that makes Huntly Gordon’s memoir, drawn from his letters written from the Front, such a potent one.
He was sensitive, intelligent, unpretentious and, as his account reveals, capable of detached and trenchant judgement. As the summer of 1914 drew to a close, it was difficult for a16 year-old schoolboy to realize that the world for which he had been prepared at Clifton College was itself preparing for war. By 1916, he was commissioned in the Royal Field Artillery. By June 1917, he was at the Ypres Salient getting his ‘baptism’ at Hell Fire Corner in an intensive artillery duel that formed the prologue to Passchendaele itself. Early in 1918, his battery would fight a series of rearguard actions near Baupaume that would help turn the tide of the massive German Spring offensive.
Huntly Gordon has given us an enduring and classic memoir: a poignant and extraordinarily human account of history as it happened.