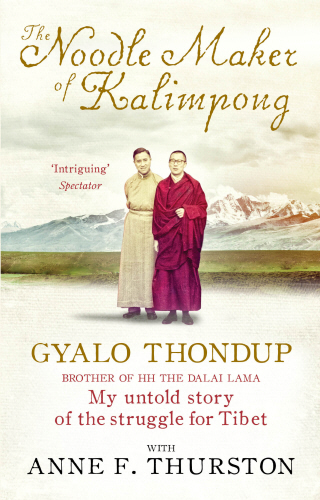 The Noodle Maker of Kalimpong

My Untold Story of the Struggle for Tibet

For over half a century, noodlemaker Gyalo Thondup has been a familiar figure in the Himalayan hill town of Kalimpong. But it was not until 2010 that the townsfolk discovered his true identity: Gyalo Thondup is none other than the older brother of the Dalai Lama and his special envoy, a trusted interlocutor between Tibet and foreign leaders from Chiang Kai-shek to Jawaharlal Nehru, Zhou Enlai to Deng Xiaoping. Indeed, only the Dalai Lama himself has played a more important role in the political history of modern, tragedy-ridden Tibet.

Now, for the first time, Gyalo Thondup is prepared to tell his story. His remarkable account offers an intimate, personal look at the Dalai Lama and his immediate family, as well as an insider's view of the vicious and sometimes deadly struggles within the Potala Palace - the seat of power in Tibet. His is a story of the 'real' Tibet - a country that is secular as well as sacred, where the source of conflict is not just with China but between Tibetans themselves. Candid and insightful, this long-awaited account reveals Gyalo Thondup to have been a key figure in the great game played out by China, India, Russia and the United States over the strategically important Tibetan plateau.