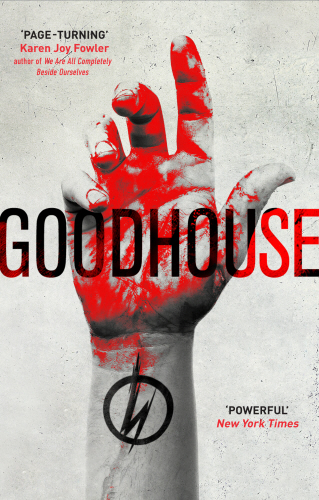 Goodhouse is not supposed to be a prison. Despite the guard dogs, the tracking devices, and the fact that the boys are mandated to attend and unable to leave, it’s supposed to be a second - and final -chance.

Across the country, sixty thousand boys are locked into Goodhouse campuses until they turn 18. What they all have in common are the genetic markers that indicate a predisposition towards violent and criminal behavior. Every lesson taught at Goodhouse is meant to be an honest effort to correct their inherent ‘wrong-thinking,’ to train them for a future when they might join the civilian world.

Goodhouse tells the story of James, a boy condemned to the system at the age of three. With no memory of his parents or even his real name, James thrives at the La Pine campus where he’s grown up, following the (many) rules, making friends, singing in the choir, all the while practicing ‘right-thinking’- until the school is violently attacked by Zeros, a group of people who think Goodhouse boys should simply be eliminated, much like rabid dogs.

James is the only survivor. Traumatised, he is transferred to a larger and more terrifying school. There he realizes that whatever its intentions, the Goodhouse system has created a culture of good-seeming boys that aspire to do wrong, to be the meanest and strongest no matter the stakes. A morning beating is more common than a decent breakfast; the boys are used as guinea pigs to test dangerous new drugs; some disappear without warning, never to be seen again.

Goodhouse has come to be a world that thrives on fear and division - where hatred and hopelessness are the heartbeat of a population on the verge of chaos. In order to survive, James must forge new alliances and break every rule he’s been conditioned to follow for his entire life.