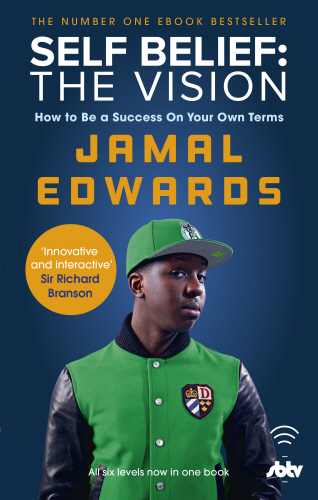 Self Belief: The Vision

How to Be a Success on Your Own Terms
Paperback

Jamal Edwards will forever be remembered as an inspiring and pioneering figure in the music industry. His book Self Belief: The Vision will show you how this trailblazing music entrepreneur beat the system and made it big in business in his own way.

At the age of 15, with only a hand-held camera and a Wi-Fi connection, Jamal started to build his media empire. The videos he made showcased undiscovered talent on the underground music scene.

By the age of 20 Jamal signed a deal with Sony RCA to become CEO of his own record label, Just Jam Records and was named one of Richard Branson's Virgin Media Pioneers 2012. Jamal Edwards was founder and CEO of the UK's most successful online youth broadcaster SB.TV which helped launch the careers of artists like Stormzy, Ed Sheeran and Dave.

The book features six levels, in which Jamal sets tasks and challenges to help the reader get to where they want to be. Along the way the reader will come across Decision Points where they will have to choose a path through their business journey.

Each level features a foreword by one of Jamal's friends or mentors, including successful people in music, media and business such as Sir Richard Branson, Emeli Sandé, JacksGap, Ed Sheeran, Jessie J and Idris Elba.

Level 1 - Take Control is where you'll step outside your comfort zone and find out your strengths and weakness.

Level 2 - The Knowledge is where you'll start researching your ideas.

Level 3 - Building the Foundations is where you'll build your team and learn how to market and promote you and your idea.

Level 4 - Launch Time will show you how best announce your idea to your audience.

Level 5 - Going Large is where you'll learn how to grow and develop your idea.

Level 6 - Keep It Fresh is about building the momentum, keeping your focus and looking to the future.

A mix of inspirational business book, memoir and game, Self Belief: The Vision shares Jamal's own story and some of the things he learned, in order to inspire other young people to get some self-belief and turn their dreams and ideas into reality.