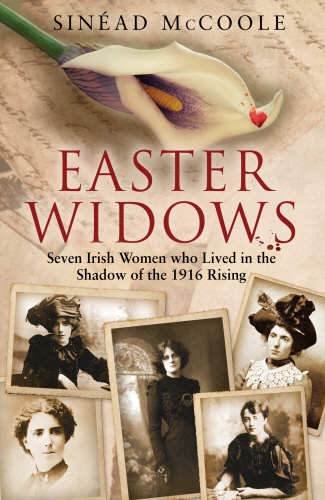 One week in May 1916, seven Irish women became widows. When they had married their husbands they had embarked on very different lives. They married men of the establishment; one married a lecturer, two others married soldiers, another a civil servant. These women all knew each other and their lives became intertwined.
For the seven women whose stories are told in Easter Widows, their husbands’ interest in Irish culture, citizenship and rights became a fight for independence which at Easter 1916 took the form of military action against the British. These men were among the leaders who formed a provisional government of the Irish Republic and issued a proclamation of Irish Independence.
But the Rising was defeated, and the leaders were arrested and hastily executed. Some of the widows broke under the strain of their experiences and this story tells of miscarriage and tragedy. Yet for another of the women, the execution of her husband allowed her to return from self-imposed exile, freed from the fear that her son would be taken from her by her estranged husband.
This is also a story of women of power and success – some of the widows emerged from the shadows to become leaders themselves. It is a human story told against the backdrop of the years of conflict in Ireland 1916-1923 - the Rising, the War of Independence and the Civil War.
Easter Widows introduces all the characters separately through the romances of these seven women – Lillie, Maud, Kathleen, Aine, Agnes, Grace, Muriel – before bringing their stories together in a cohesive narrative. These interlinking stories are clearly embedded in an authentic historical account.