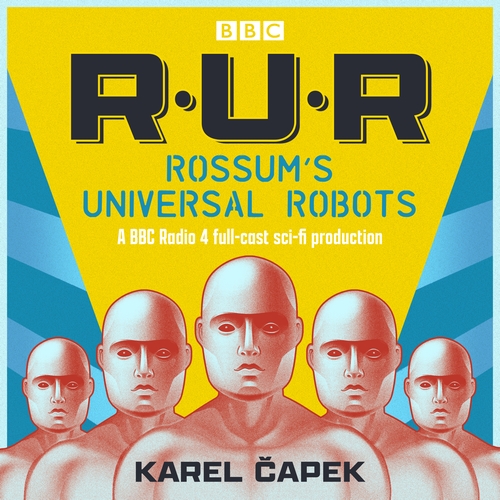 First published in 1921, Karel Capek's ultra-prescient play R.U.R has become a classic of dystopian literature, giving us the word 'robot' and inspiring movies and TV series from Blade Runner to Westworld. Set in Capek's 1920s version of the future, this radio reimagining blends music, comedy and drama to tell the story of a world dominated by mechanisation and the pursuit of profit.

It is the year 2000, and an incredible new technology - the robot - has been invented, freeing human beings from the need to work. Grown from human cells, these androids appear identical to humans - only stronger and cleverer. They have no free will and no desires. They want nothing - until the idealistic Lady Helen visits their island factory and persuades one of the scientists to instil consciousness into them. But once sentient, the robots become aware that they have unwittingly enabled a runaway cycle of overproduction, which is now wrecking the planet. There is only one logical solution: humanity must be destroyed...

Tackling big, contentious questions with a light touch, this moving production is full of humour and heart. Made by the team behind the award-winning Magnitsky the Musical, it features an immersive, retro-futurist soundscape and stunning original songs, and stars an ensemble cast including Paul Chahidi (The Death of Stalin, This Country), Jasmine Hyde (Doctors) and Paul Hilton (Slow Horses).

Also included is a fascinating episode of Radio 3's Sunday Feature, The Robots Are Us, in which Ken Hollings examines the creation and legacy of R.U.R, talking to historians and roboticists to discover how Capek's landmark play gave birth to the idea of the 'revolt of the machines' and presaged our 21st Century ethical conundrums of existence, rights and reasoning.