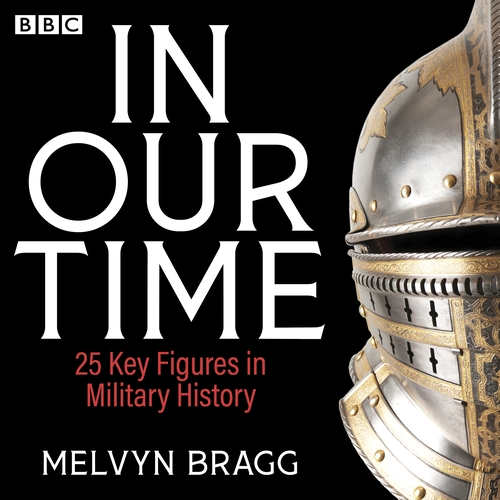 In Our Time: 25 Landmarks in Military History

Melvyn Bragg and guests explore the history and philosophy of warfare, from the Bronze Age to the modern era

'A feat of public service broadcasting' The Telegraph

One of BBC Radio's flagship programmes, In Our Time is both highly acclaimed and immensely popular. First broadcast in 1998, it has built an audience of over 2 million listeners, who tune in each week to be enlightened and entertained by Melvyn Bragg and his expert panel as they tackle subjects ranging from macromolecules to the Muses.

This special themed collection comprises the highlights of military history: 25 episodes exploring the most important conflicts of the past 3000 years, plus additional programmes discussing the history and future of war and key military themes. Here are discourses on the philosophy of warfare and Sun Tzu's hugely influential treatise The Art of War; analyses of slavery and empire and the concept of a 'just war'; as well as examinations of pivotal wars and battles including the Trojan War, the Third Crusade, the Wars of the Roses, the Battle of Trafalgar, the War of 1812 and the Spanish Civil War.

Engaging, illuminating and accessible, these engrossing discussions will appeal to regular In Our Time listeners and newcomers alike. Whether you're a student of military history or simply a fan of intelligent radio, this superbly curated compendium has you covered.

First broadcast on BBC Radio 4 on the following dates:

Part I: The Philosophy of Warfare

The Trojan War 31 May 2012
With Edith Hall, Ellen Adams and Susan Sherratt

The Battle of Tours 16 January 2014
With Hugh Kennedy, Rosamond McKitterick and Matthew Innes

Alfred and the Battle of Edington 7 April 2005
With Richard Gameson, Sarah Foot and John Hines

The Battle of Lincoln 1217 4 May 2017
With Louise Wilkinson, Stephen Church and Thomas Asbridge

The Battle of Bannockburn 3 February 2011
With Matthew Strickland, Fiona Watson and Michael Brown

The Siege of Orléans 24 May 2007
With Anne Curry, Malcolm Vale and Matthew Bennett

The Wars of the Roses 18 May 2000
With Dr Helen Castor, Professor Colin Richmond and Dr Steven Gunn

The Siege of Munster 5 November 2009
With Diarmaid MacCulloch, Lucy Wooding and Charlotte Methuen

The Siege of Malta, 1565 11 January 2018
With Helen Nicholson, Diarmaid MacCulloch and Kate Fleet

The War of 1812 31 January 2013
With Kathleen Burk, Lawrence Goldman and Frank Cogliano

The Sino-Japanese War 8 May 2014
With Rana Mitter, Barak Kushner and Tehyun Ma