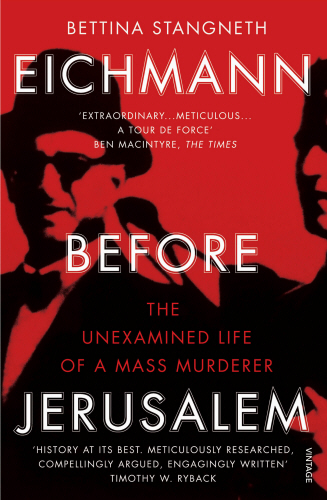 The Unexamined Life of a Mass Murderer

Smuggled out of Europe after the collapse of Germany, Eichmann managed to live a peaceful and active exile in Argentina for years before his capture by the Mossad. Though once widely known by nicknames such as 'Manager of the Holocaust', he was able to portray himself, from the defendant's box in Jerusalem in 1960, as an overworked bureaucrat following orders – no more, he said, than 'just a small cog in Adolf Hitler's extermination machine'.

How was this carefully crafted obfuscation possible? How did a principal architect of the Final Solution manage to disappear? How had he occupied himself in hiding?

Drawing upon an astounding trove of newly discovered documentation, Stangneth gives us a chilling portrait not of a reclusive, taciturn war criminal on the run, but of a highly skilled social manipulator with an inexhaustible ability to reinvent himself, an unrepentant murderer eager for acolytes to discuss past glories and vigorously planning future goals.