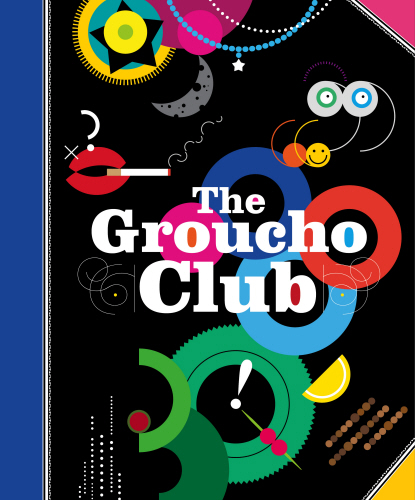 We begin at the beginning according to Liz Calder, Groucho’s inventor. Liz’s friend and fellow publisher and founder Carmen Callil called her ‘probably the most magnificent of the generation of women who changed things; who moved the centre of the universe, of vision, and gave it a jolt’. The opening of the Groucho Club in 1985 was a part of that jolt. Dreamt up by a group of publishers as an alternative to stuffy gentleman’s clubs who wanted somewhere to meet and relax, they approached Anthony Mackintosh owner of ‘The Zanzibar’ – a members bar in Covent Garden – and Restaurant 192. Tony and his partners got to work and the Groucho Club was created.

Premises were found in Soho, the bohemian heart of London, and the doors opened to a membership drawn from the arts, publishing, film, music and advertising. It soon became the approved watering hole for the bright young things.

Over the years its four thousand or so members have become something of a dysfunctional family. And along the way the Club has, through member's donations, accidentally become the guardian of one of the most, if not the most, special collections of modern British art on the planet. But above all it has become a home from home.

To mark their thirtieth Birthday in 2015 the Groucho Club are publishing this, their first autobiography.