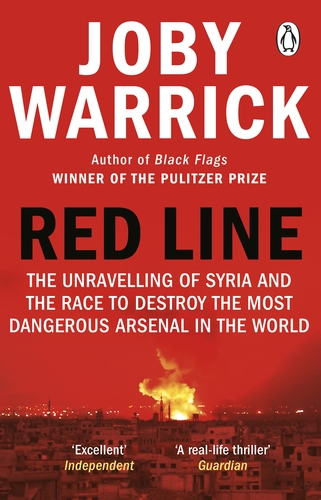 From the Pulitzer Prize-winning author of Black Flags, the harrowing true story of the mission to find and destroy Syria's chemical weapons and defeat ISIS - only to lose control of both.

In August 2012, Syrian president Bashar al-Assad was clinging to power in a vicious civil war. Concerned that Assad might resort to chemical weapons, the international community warned that any such use would cross "a red line", warranting a military response. When a year later Assad bombed the Damascus suburb of Ghouta with sarin gas, killing hundreds, global leaders were torn between living up to their word and becoming mired in another unpopular Middle Eastern war. So when Russia offered to store Syria's chemical weapons, the world leaped at the solution.

So begins a race to find, remove, and destroy 1,300 tons of chemical weapons in the middle of Syria's civil war. Told in harrowing detail, the initial effort is a tactical triumph for the West, but soon Russia's long game becomes clear: it has UN cover to assist Assad's regime. Meanwhile, the territory gains of ISIS further destabilise the country, and the terrorist organisation seeks to secure Syria's chemical arsenals for itself, with horrifying consequences.

Red Line is a classic Joby Warrick true-life thriller: a character-driven narrative with a cast of heroes and villains, including weapons hunters, politicians, commandos, diplomats, and spies. Through original reporting and eyewitness accounts from direct participants, Joby Warrick reveals how a well-intentioned effort to save Syrian lives became swept up in a calamitous chain of events that would spawn a terrorist movement, unleash torrents of refugees, frustrate two U.S. presidents and empower the Western alliance's most dangerous foes.