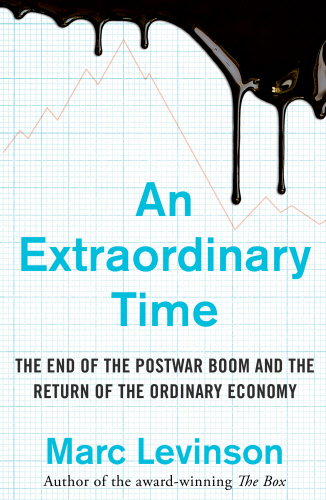 A Washington Post and Strategy+Business Book of the Year.

Stagnant wages. Feeble growth figures. An angry, disillusioned public. The early 1970s witnessed the arrival of the problems that define the twenty-first century.

In An Extraordinary Time, Marc Levinson investigates how the oil crisis of the 1970s marked a radical turning point in global economics: and paved the way for the political and financial troubles of the present. Tracing the remarkable transformation of the global economy in the years after World War II, Levinson explores how decades of spectacular economic growth ended almost overnight – giving way to an era of uncertainty and political extremism that we are still grappling with. Above all, Levinson shows that we must understand the economic disaster of the 1970s if we want to overcome the problems we face today. By focusing on a pivotal but often overlooked moment in the twentieth century, An Extraordinary Time offers a crucial and timely reappraisal of our age.

‘A smoothly written account of the US and the world economy during the 1970s.’ Wall Street Journal

‘Provocative . . . Levinson reminds us how mesmerising the post-war boom really was.’ Washington Post