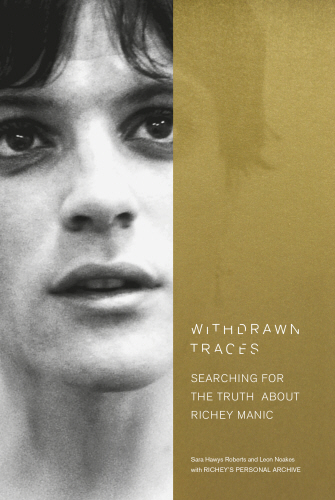 Searching for the Truth about Richey Manic, Foreword by Rachel Edwards

New discoveries and a fresh perspective, with unprecedented access to Richey's personal archive

On 1 February 1995, Richey Edwards, guitarist of the Manic Street Preachers, went missing at the age of 27. On the eve of a promotional trip to America, he vanished from his London hotel room, his car later discovered near the Severn Bridge, a notorious suicide spot.

Over two decades later, Richey’s disappearance remains one of the most moving, mysterious and unresolved episodes in recent pop culture history.

For those with a basic grasp of the facts, Richey's suicide seems obvious and undeniable. However, a closer investigation of his actions in the weeks and months before his disappearance just don’t add up, and until now few have dared to ask the important questions.

Withdrawn Traces is the first book written with the co-operation of the Edwards family, testimony from Richey’s closest friends and unprecedented and exclusive access to Richey’s personal archive.
In a compelling real-time narrative, the authors examine fresh evidence, uncover overlooked details, profile Richey's state of mind, and brings us closer than ever before to the truth.