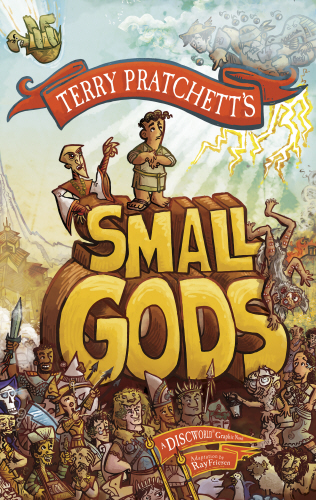 Fans of Sir Terry Pratchett will love this stunning graphic novel adaptation of his bestselling standalone Discworld novel Small Gods. Beautifully brought to life by illustrator Ray Friesen, it takes a close look at religion's institutions, its people, its practices and its role in politics in Pratchett's unique way...

In the beginning was the Word. And the Word was: 'Hey, you!' This is the Discworld, after all, and religion is a controversial business.

Everyone has their own opinion, and indeed their own gods, of every shape and size, and all elbowing for space at the top.

So when the great god Om accidentally manifests himself as a lowly tortoise, stripped of all divine power, it's clear he's become less important than he realised.

In such instances, you need an acolyte, and fast. Enter Brutha, the Chosen One - or at least the only One available. He wants peace, justice and love - but that's hard to achieve in a world where religion means power, and corruption reigns supreme . . .