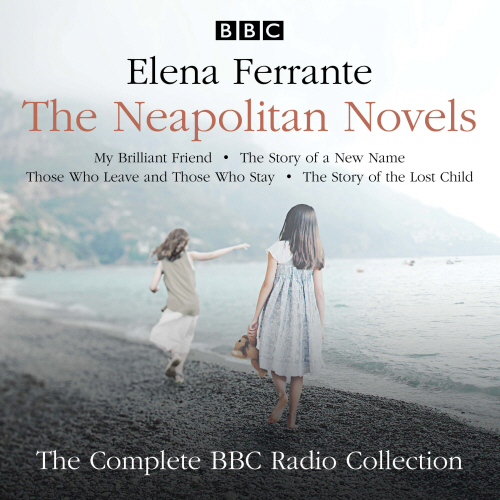 From one of Italy's most acclaimed authors, The Neapolitan Novels is an exploration of the friendship between Lila and Lena, two bright young girls who grew up in the tough, rough streets of post-war Naples. This is no normal friendship; it's a friendship that loves, hurts, supports and destroys - and yet it is one that lasts a lifetime. These four full-cast BBC adaptations bring the streets of Naples vividly to life.

The first novel , My Brilliant Friend, begins in the 1950s in a poor but vibrant neighbourhood on the outskirts of Naples. Growing up on these streets two girls, Lena and Lila, learn to rely on each other ahead of anyone - or anything.

The Story of a New Name sees the two girls striving to make a better life for themselves. They work hard at school but Lila is stopped in her tracks when forced to give up her education to work for the family shoe-making business. It's not long before their worlds are pushed apart.

In the third book, Those Who Leave and Those Who Stay, Lena escapes to Milan but struggles to find the courage to live, parent and write again after her marriage to her increasingly dismissive husband. Lila, meanwhile, also struggles to rise above her social conditions and desperately tries to find a way to better herself in whatever way she can.

In the final part of their story, The Story of the Lost Child, Lena returns to Naples with her two children to find Lila has also managed to turn her life around, despite remaining in the claws of violent and mafia-run Naples.

Through broken marriages, violent pasts, and the yearning for something more, the two women always turn to each other as their friendship – and the tensions between them – grow ever deeper.

Adapted from the books by Elena Ferrante, translated by Ann Goldstein.
Dramatised by Timberlake Wertenbaker
Directed by Celia de Wolff
A Pier production for BBC Radio 4.