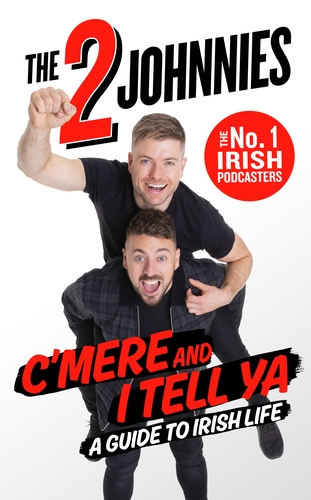 C'mere and I Tell Ya

The 2 Johnnies Guide to Irish Life

The 2 Johnnies' massive success has taken them as far afield as Sydney, Compton and Abu Dhabi. But for them nothing compares to living in Ireland. And in C'Mere and I Tell Ya they dig into the tastes, habits and rites of passage that have made them who they are.

Whether it's ...
- dressing for the debs ('I'd say my cravat was the talk of Templemore for weeks')
- succeeding in a band ('I did backing vocals for six months and it turned out I was singing the wrong lyrics')
- doing a Strictly fundraiser for your GAA club ('Remember you're not Julia Roberts and the local butcher isn't Richard Gere, so keep it in the pants')
- recognizing the no-go moves at a stag ('Nobody wants to see a sixteen-stone man in a pink thong. Nobody')
... Johnny B and Johnny Smacks capture it perfectly. And they have down-to-earth advice for every conceivable situation - and a few inconceivable ones.

C'Mere and I Tell Ya is a one-stop celebration of Irishness, chicken goujons and being sound.

'It's funny but there is always truth in the humour ... A hell of a Christmas present!' Oliver Callan, RTÉ