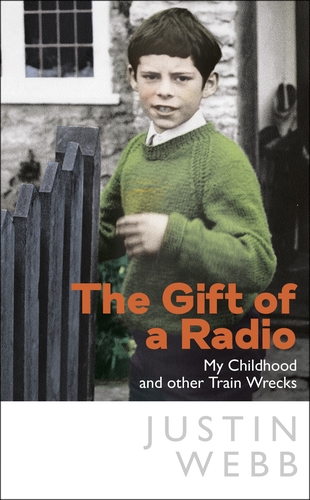 The Gift of a Radio

My Childhood and other Train Wrecks

'Justin is a great broadcaster because he sounds like a real human being. This hugely entertaining book helps explain why'. John Humphrys

Between his mother's un-diagnosed psychological problems, and his step-father's untreated ones, life at home was dysfunctional at best. But with gun-wielding school masters and sub-standard living conditions, Quaker boarding school wasn't much better.

And the backdrop to this coming of age story? Britain in the 1970s. Led Zeppelin, Janis Joplin and Free. Strikes, inflation and IRA bombings. A time in which attitudes towards mental illness, parenting and masculinity were worlds apart from the attitudes we have today. A society that believed itself to be close to the edge of breakdown.

Candid, unsparing and darkly funny, Justin Webb's memoir is a portrait of personal and national dysfunction. So was it the brutal experiences of his upbringing, or an innate ambition and drive that somehow survived them, that shaped the urbane and successful radio presenter we know and love now?