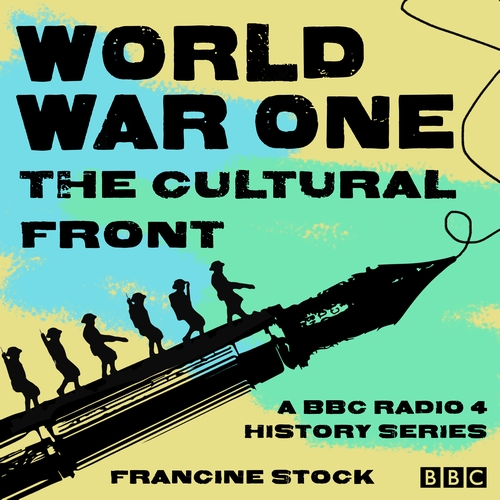 World War One: The Cultural Front

The First World War was the great military and political event of its time. But it was also an imaginative event: one that profoundly altered the ways in which men and women thought about the world, and about culture and its expressions. In this compelling five-series programme, journalist and presenter Francine Stock scrutinises the diverse responses of artists and entertainers to the bitter realities of war, and reveals how their new perspectives entered the public consciousness.

Each series focuses on a specific year of the conflict, beginning with 1914, as the written word was mobilised; the music industry embraced both patriotism and escapism; and painters including Kandinsky created some of their most powerful work. Stock shows how the aftershocks of war sparked the rise of modernism and the avant-garde in 1915, and looks at how trauma was addressed in the works of Freud and the compositions of Debussy. Moving on to the following year, she demonstrates how the carnage at Verdun and the Somme inspired Dadaism, galvanised creators from Picasso to Apollinaire - and made the tank into an unlikely icon on the home front.

Looking at 1917, Stock tells the story of the Harlem Hellfighters and how jazz conquered France; finds out about the popular cross-dressing theatre troupes who were taking the Front Line by storm; and listens as the first meeting between poets Siegfried Sassoon and Wilfred Owen is celebrated in a landmark violin performance using instruments made in memory of the duo. She concludes by examining the war's final deadly year, as US troops arrive on the Western Front, Charlie Chaplin makes a film about a private with dreams of becoming a war hero; the Austro-Hungarian Empire falls; and Elgar, Stanley Spencer and Rebecca West anticipate the end of the hostilities and the soldiers' return.

First broadcast on the BBC Radio 4 on the following dates: