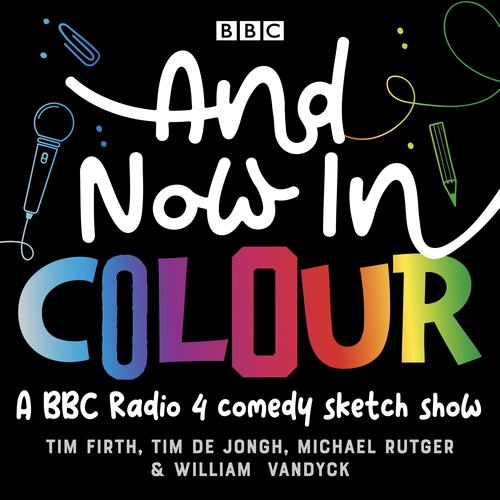 And Now in Colour

First broadcast in 1990 and 1991, here are all 14 episodes of the cult comedy sketch show written and performed by Tim Firth, Tim de Jongh, Michael Rutger and William Vandyck. Join the team as they whisk the audience away on a series of adventures, including a day trip to Margate, Territorial Army manoeuvres on Salisbury Plain, an excursion to Nevada for NASA astronaut training, a Euro link-up in France and a luxury tour of London.

Along the way, they entertain us with a plethora of precision comedy sketches, interspersed with songs, jokes and banter. You'll get drawn in to the architects' improvisation game, Whose Pencil Line Is It Anyway?, discover an unusual way of plotting a novel, step inside the mind of a Shakespearean actor, and listen to some rather surprising Books at Bedtime...

There's also a phone-in for people having problems with their phones, a car valeting service with a twist, and a James Bond theme as written by Richard Stilgoe - plus Cockney rhyming slang for dyslexics, the news for suspicious people, Crufts for ordinary dogs and scores of other comic skits.

And in two fantastic festive specials, it's party time as the quirky quartet serve up some far from traditional Christmas fare - including dried fish, advocaat and an exploding rabbit...