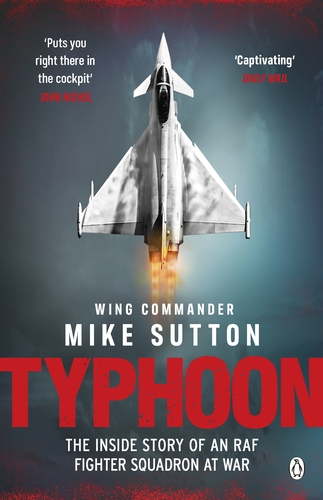 The thrilling account of the Typhoon FGR4s in the war against ISIS, from the RAF Wing Commander who led them into combat

'Adrenaline-fuelled. A rare insight into the high-pressure, high-stakes world of an RAF fighter squadron at war' JOHN NICHOL
________

'I eased the jet's nose down and rested my index finger on the trigger. Three seconds to go. Almost 500 knots. The whole airframe pulsed as I started to fire . . .'

Mike Sutton led the RAF's premier Typhoon squadron into battle against a brutal enemy. Flying the world's most advanced multi-role combat jet, every mission across the treacherous skies above Syria and Iraq saw him and his team tested to the limit. The threat of being shot down was a fact of life. Every split-second decision meant the difference between life and death.

Typhoon brings to life the exhilarating and exacting world of a fighter squadron at war like never before.