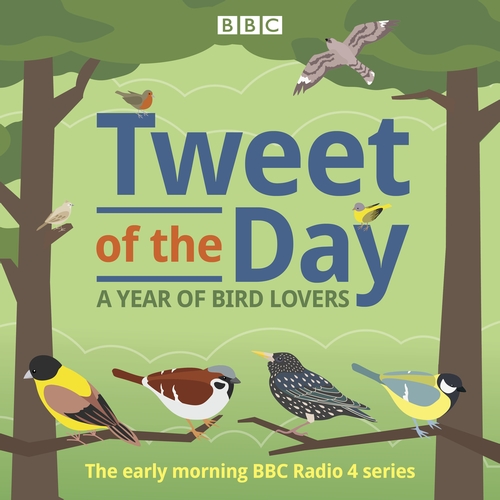 Bird lovers including Will Young, Samuel West, Dermot O'Leary, Greta Scacchi and Sue Perkins introduce us to their favourite birds - plus, Alison Steadman presents The Twelve Tweets of Christmas

Since 2013, Tweet of the Day has been a daily delight for early risers, with its 90 seconds of beautiful birdsong and fascinating ornithological stories. But what of the people who tune in to this avian chorus? In this collection, we bring to the airwaves the conversational voices of an array of wildlife enthusiasts, all eager to recount their encounters with birds - among them 'Birdgirl' Mya-Rose Craig, writers Joe Harkness, Amy Liptrot, Melissa Harrison and Mark Cocker, Springwatch host Lindsey Chapman and the staff at Slimbridge Wetland Centre, the RSPB, BirdLife International and the British Trust for Ornithology. Together, they guide us through the year, from May to March, and introduce us to the birds that have inspired them.

We also hear from some unexpected celebrity sources, who share stories of the birds that catch their eyes - and their ears. Will Young tells us about seeing a Woodland Kingfisher as a child in South Africa; Sue Perkins recalls coming face to face with a Great Horned Owl and Greta Scacchi reveals her fondness for the magnificent Goldfinch.

Other famous names include Samuel West, who counts the turkey-like Capercaillie and the dapper, white-bibbed Dipper among his ten picks; and Dermot O'Leary, whose five choices include 'the Alsatian of the skies', the Greater Black-Backed Gull. Jimi Goodwin, the lead singer in Doves, swerves his band's titular bird in favour of the Cuckoo and the Mallard; while musician Fyfe Dangerfield celebrates the two birds that gave his bands their names - Guillemots and Gannets - along with eight others, and uses his own birdsong recordings to experiment in music.

Also featured is The Twelve Tweets of Christmas, in which Alison Steadman provides a selection of festive editions inspired by the well-known carol 'The Twelve Days of Christmas'.