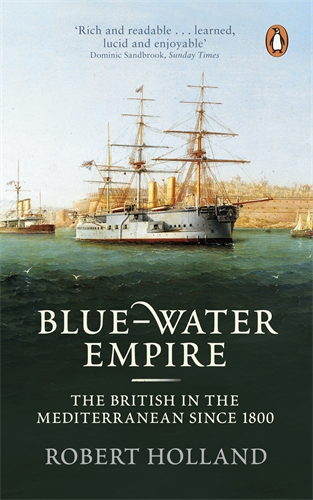 The British in the Mediterranean since 1800
Ebook

Blue-Water Empire is Robert Holland's magnificent narrative of Britain's military and cultural ties with the Mediterranean Sea, in the style of the epic naval histories of N. A. M. Rodger.

Britain has been a major presence in the Mediterranean from the Battle of the Nile to the end of empire, as both a military and a colonising force on the islands and coastlines of the sea. Robert Holland traces the fascinating story of that presence, from its legacies in culture, language and law to the Mediterranean's own influence on Britain.

Evoking the conflicts and contrasts between British and local societies caught up in dramatic events, as well as their mutual resilience under pressure, Blue Water Empire charts with vigour, flair and clarity the British experience in the Mediterranean in the age of empire.

'A rich and readable account of the British in the Middle Sea ... As Holland's learned, lucid and enjoyable work makes clear, many British politicians saw the Mediterranean as the pre-eminent global strategic arena, representing the key to victory in Europe and Asia' Dominic Sandbrook, Sunday Times

'This is an important subject, and it has never before been drawn together into a single coherent narrative ... Blue-Water Empire puts the land, not the sea, at the heart of the story' Literary Review

'Robert Holland's masterly history of the Mediterranean is a pleasure to read. Blue-Water Empire shows how Britain's mastery of the Middle Sea shaped the modern world, whilst reminding us how profoundly the Mediterranean has influenced the British' Simon Ball (author of The Bitter Sea: The Struggle for Mastery in the Mediterranean, 1935-1949)

Robert Holland is one of the world's leading historians of the Mediterranean and the author of Britain and the Revolt in Cyprus, 1954-59, and (with Diana Markides) The British and the Hellenes: Struggles for Mastery in the Eastern Mediterranean, 1850-1960. He holds professorial positions at the Centre for Hellenic Studies in King's College London and the Institute of Commonwealth Studies in the same University.