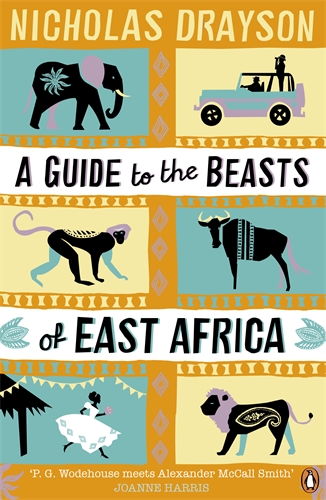 A Guide to the Beasts of East Africa

For lovers of Alexander McCall Smith, the engaging follow up to Nicholas Drayson's much-loved A Guide to the Birds of East Africa sees the return of Mr Malik and the East African Ornithological Society.

Mr Malik has been busy planning the Asadi Club's annual safari. But a series of crimes puts the club's very existence at risk. It is up to Mr Malik and Co. to solve a decades-old murder, recover the club mascot and identify, once and for all, the most dangerous beast in Africa.

Not to mention his only daughter may, or may not, be getting married in a week.

'A book of immense charm; a sort of P G Wodehouse meets Alexander McCall Smith' Joanne Harris on A Guide to the Birds of East Africa

'A delightful comedy... It invites comparison to The No.1 Ladies' Detective Agency books, but it's original and, if anything, has more depth' Daily Mail on A Guide to the Birds of East Africa

Nicholas Drayson was born in England and lived in Australia since 1982, where he studied zoology and gained a PhD in 19th-century Australian natural history writing and two daughters. He has worked as a journalist in the UK, Kenya and Australia, writing for publications such as the Daily Telegraph and Australian Geographic. He is the author of three previous novels, Confessing a Murder, Love and the Platypus and A Guide to the Birds of East Africa (Penguin, 2008). He is now wandering through England aboard his boat, the Summer Breeze.